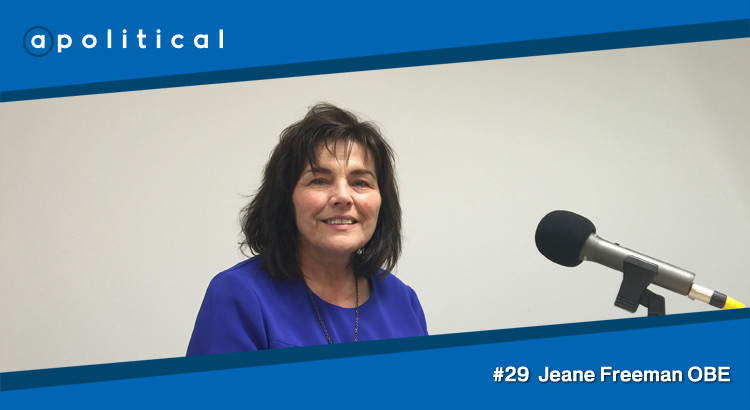 In Episode 29 of Apolitical we speak with Jeane Freeman OBE, a co-founder of Women for Independence and the SNP’s candidate for Carrick, Cumnock & Doon Valley in the 2016 Holyrood elections. We chat about her journey from the Labour party to the SNP; the potential impact of tax credits reform; TTIP; and the election campaign ahead.

Amongst the topics we discuss with Jeane on the podcast are:

• Her involvement in student politics;

• Joining the Labour party and her role as senior political advisor to First Minister Jack McConnell;

• When she determined that independence was in Scotland’s best interests;

• Joining the SNP and her candidacy for Carrick, Cumnock & Doon Valley;

• Her thoughts on the tax credits reform proposed by George Osborne and the Conservative government;

• Reflections on Scottish Labour’s response and thoughts on the SNP’s approach to the issue;

• Revisiting her BBC interview with Andrew Neil during the referendum campaign on TTIP;

• Her present views on TTIP and whether it is still a threat;

• Early canvassing and the current lie of the land in Carrick, Cumnock & Doon Valley;

• Her hopes for the next session of the Scottish Parliament.